Lu Ban chef is back in the GBM kitchen 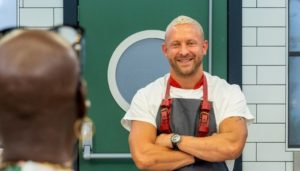 Dave Critchley, the charismatic chef at Lu Ban Liverpool, is back in the Great British Menu kitchen.

He is featuring in the NW heats, which are running in early February, and he is looking to make the most of his return.

Dave competed in Series 16 of the popular BBC2 cookery show and was eliminated after day two. This time he goes back in determined to make it to the judges’ chamber on the final day.

Theshow’s theme is 100 Years of Great British Broadcasting, with Dave’s menu focusing on links to his beloved home city of Liverpool, including Cilla Black and Ken Dodd.

Having worked with Dave, Lu Ban and the shows producers for series 16, we have picked up the baton again.

Working to a tight deadline, we worked with the producers and their PR team on a release, the PR and what can and can’t be put into the public domain is tightly controlled.

We secured coverage in a range of titles including Liverpool Echo, Liverpool Noise and Liverpool Business News.

Auvent PR also supported with social media posts throughout the week and secured a BBC Radio Merseyside interview one the heats had concluded.